Singapore Property Market During A Pandemic

Latest Update: Contrary to popular belief that property prices will tank by 20% or more, the private residential market has hold up well and posted a moderate 0.3% gain in Q2/2020 despite the circuit breaker measure from 7 Apr 2020 to 18 Jun 2020 where all physical viewing comes to a halt. Scroll to the bottom of the page for the press release.

I have been asked by numerous clients and associates what could be the possible impact of the COVID-19 virus on the property market and so I decided to pull out some statistics and charts and study the property market during the SARS period of Nov 2002 to Jul 2003 and the H1N1 period between May 2009 to Feb 2010 and property price DID NOT FALL in either periods as most have anticipated. I know you must be thinking “How could that be possible?” but please read on for the supporting research.

Before I take you back to the past, let us take a positive cue from CapitaLand China as they are seeing a 5.5 times jump in residential sales in March 2020, compared to the sales value of January and February combined. During the SARS period (Nov 2002 to Jul 2003), there appears to be a dip in the transaction volume possibly due to less viewing activities but the prices were climbing steadily and the market gained 1.5% during the 9-month period. The SARS outbreak was successfully contained and Singapore was declared free of SARS by the World Health Organization on 30 May 2003 and immediately, the property market rebounded and peaked with more than 3 times the transactions in Jul 2003. (Refer to below chart for the details). 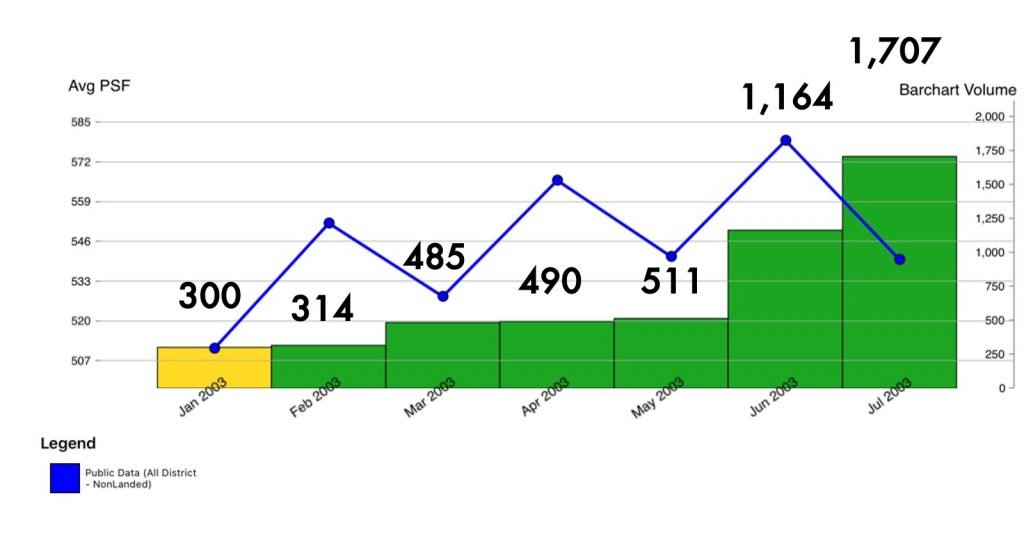 Another reference point and a more recent one would be the H1N1 flu between May 2009 to Feb 2010, killing 18 Singaporeans. During the 10-month period, the overall private residential market went up by a whopping 33.18% and extended the increase by another 4.02% a year thereafter (refer to chart below). Below is an article published from Business Times on 15 Feb 2020. Due to travel curtailment and some domestic buyers shy away from viewings, sales volume could be affected in the short term but the underlying demand for homes remain healthy and could resurface as pent-up demand when the pandemic is over. Below article was published on The Straits Times on 26 May 2020. Below article was published on The Straits Times on 25 July 2020. Lastly, let’s take a quick look at how the 2 viruses stack up against each other in terms of numbers.

Let us all continue to stay vigilant, take good care of our bodies so as to keep the immunity level high and hope the virus will be under control very soon.

If you find this research useful, please feel free to share. Any property related questions or research you would like me to cover, simply drop me a text by clicking on the WhatsApp button at the bottom of the screen.